New in OS X: Get MacRumors Push Notifications on your Mac

AirPower: In Production Now, What We Know
AirPods 2: What We Expect and When
Smart Battery Cases for Apple's Newest iPhones: A Guide

Friday January 8, 2016 7:53 am PST by Joe Rossignol
Apple has registered a trio of auto-related top-level domain names, including apple.car, apple.cars and apple.auto. Whois records updated on January 8 show that Apple registered the domains through sponsoring registrar MarkMonitor Inc. in December 2015, although the addresses are not yet active.

The domains could be related to CarPlay, but there will naturally be speculation about their possible relation to Apple's much-rumored electric vehicle plans. Multiple reports over the past year said Apple has a secretive team of hundreds working on an electric vehicle with a prospective 2019 or 2020 shipping date.

There is increasing evidence that Apple is at least exploring the auto industry, including the iPhone maker's discussions with a secure Bay Area testing facility for connected and autonomous vehicles and the company's August meeting with the California DMV to review self-driving vehicle regulations.

Apple has aggressively recruited engineers and other talent from Tesla, Ford, GM, Samsung, A123 Systems, Nvidia and elsewhere to work on the rumored "Apple Car" project, which has allegedly been called "Project Titan" internally. Electric motorcycle startup Mission Motors even ceased operations after losing employees to Apple.

Apple likely remains in the earlier stages of research and development of its rumored electric vehicle, and it remains possible the company's plans change over the next three to four years. Nevertheless, the trio of new domains provide yet another clue that Apple may one day compete with the likes of Tesla and Google.

I wonder if the Apple car will come with an Apple sticker pre-attached?


I can guarantee one thing: simply by virtue of it being in a moving car, Safari will be zippier!
Rating: 11 Votes

I predict, after the first year, Apple will remove the passenger seats to make it thinner.
Rating: 10 Votes 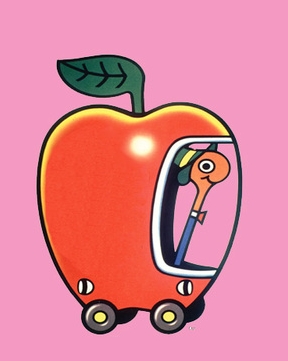 miniroll32
Of course, this can only be for the latest in inkjet technology...

Popeye206
I wonder if the Apple car will come with an Apple sticker pre-attached?
Rating: 6 Votes

Binarymix
So, Apple won't venture into making their own TVs because of profit margins and customer upgrade cycle, but they're going to make a car....

DeutscheMark
My predictions for the first gen:

1. It will have low speed and it stutters when you make a turn or accelerate too fast. carOS 1.3 will fix it, but be patient, when carOS 2.0 arrives. Better don't install carOS 3.0, because it will make your car unusable and even slower.
2. The car will come in 3 battery sizes. Be sure, you don't get the smallest option, because it won't be enough for most of you.
3. You only can use GPS when you have your iPhone with you.
4. The only port it will have is the one for charging, because that's all you gonna need, but it's on the bottom of the car, so you won't notice it and can enjoy the unique and distract free design.
4. It will have a battery big enough to make it through the day, but don't expect it to also make it through the night. So always charge it at night.
6. You can buy an extra battery case for it, that will expand your battery life by 80%. You won't notice the bulge on the top of the car.

But be sure, the 2nd gen. will be the best car ever.
Rating: 5 Votes

sza
Tim: the price will be starting at just $99999 and we are announcing some exciting accessories as well...including a hump...
Rating: 4 Votes

Xavier
We'll have to wait until version 2 for carplay.
Rating: 4 Votes

myrtlebee
This is just goofy. No other word to describe it. It strays way too far from their product lineup. Not to mention, where would the car be displayed in the Apple stores?
Rating: 2 Votes

MacRumors attracts a broad audience of both consumers and professionals interested in the latest technologies and products. We also boast an active community focused on purchasing decisions and technical aspects of the iPhone, iPod, iPad, and Mac platforms.